GoDaddy is Suboptimal for WordPress

I have a confession to make. I’ve been running a website on a shared GoDaddy web server for years. During that time I’ve really never had any problems. The tech support was fine. The performance was fine for my DotNetNuke blog and a handful of other ASP.NET pages that handle service calls from my iPhone games. I did seriously consider switching away from GoDaddy after the SOPA fiasco and the resulting backlash from the reddit community, but I did not. The thought of moving to a new hosting company was daunting and laziness took hold and squashed my desire to make a political statement.

Around a month ago, I decided to convert my DotNetNuke blog into a WordPress blog. WordPress is like a breath of fresh air after using DotNetNuke’s blogging module. The themes and plugins for WordPress are amazing and everything was going great until it became apparent that my shared web server was unable to handle the new platform. Several times a day the web site would timeout completely. I wrote a little app that pinged my web server and found that response times for a single blog page averaged around 13 seconds, with as many as 14% of the requests failing completely over the course of a day. This was unacceptable. I spoke with the GoDaddy support and they informed me that things would speed up a bit if I switched from a Windows server to a Linux server. That would be fine, except I was also running a few ASP.NET services for my iPhone games. I had to stick with Windows. They seemed to acknowledge that WordPress on Windows was slow, yet they still seem happy to sell that service with no up front indication that it performs terribly. The interwebs are filled with people complaining about the issue. Just to name a few.

I still tried desperately to make things work. I upgraded  to GoDaddy’s Ultimate 4GH plan and installed the WP Super Cache plugin (which is awesome, btw), but to no avail. It was becoming clear that a WordPress and GoDaddy were no longer an option. I started looking around to other hosting services and landed on GearHost. The process took about two days to get all of my stuff moved over, but overall it was not quite as painful as I thought it would be. The difference is nothing short of incredible. The average response times now are just over one second and I have yet to have a request fail. Not only is GearHost outperforming GoDaddy by a wide margin, but GearHost is actually cheaper than GoDaddy too. Here’s a break down in the comparison between the two services:
[table]
Service,12 Month Price,Failed Requests,Average Response Time
GoDaddy Ultimate 4GH,$9.49,14%,13356ms
GearHost CloudSite,$8.99,0%,1308ms
[/table]

Here’s a graph showing requests over the course of a day between a WordPress blog page running on GoDaddy vs the same blog page rehosted on GearHost. Each bar represents the average of 6 requests, spaced 10 minutes apart, for that hour of the day. 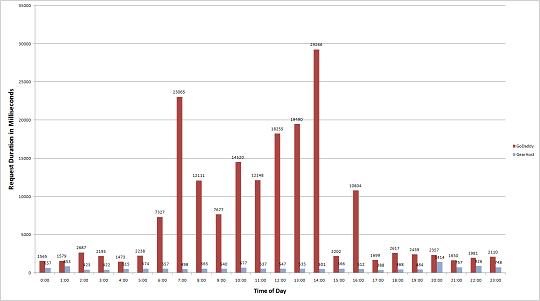 I’m very happy that I finally made the switch. GearHost does have a weird delay with FTP, which is very frustrating, but other than that the service is solid and the tech support has been great.

By continuing, you agree that we may use cookies to help customize your experience, including serving more relevant ads. Find out more.