I’ve used MochiAds before, as a developer, to monetize a few simple Flash games I made, but this week I stepped over to the other side of the fence and I uploaded an ad for my new iPhone application, Touch Island. Creating an ad was super easy, requiring only a single 300×250 image. This is the ad I uploaded: 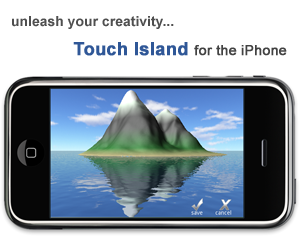 105,925 impressions, and 994 clicks. While creating the ad, I hooked it up to use an affiliate link from LinkShare to link to the app so that I can track any conversions from this ad (and also a 5% commission from the sale!). So, how many sales did I get from the MochiAd? Four. Four sales. Absolutely dismal. After Apple takes their cut, and after adding back in a 5% commission from LinkShare, this is a -97% return-on-investment. I’m beginning to learn that advertising on a small scale like this does not work. It seems that you must either go all out, or not at all. Has anyone else out there had any luck with advertising an iPhone app?